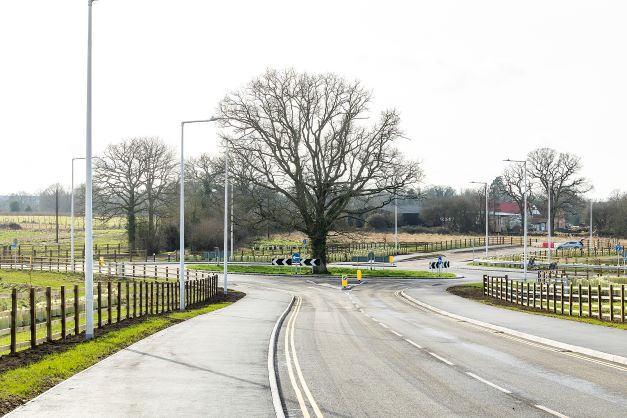 The last section of a main road which will serve the planned new homes in the town of Wokingham has been opened.

A ribbon was cut at the Eastern Gateway, part of Wokingham Borough Council’s South Wokingham Distributor Road, by staff and pupils from nearby Floreat Montague Park Primary School.

The school and new road, which includes an off-road cycle path to encourage active travel, are part of new infrastructure for the authority’s major development of 2,500 new homes in South Wokingham, which was agreed in the under its current local plan.

The latter was funded largely by developer contributions with additional funding from the Thames Valley Berkshire Local Enterprise Partnership.

The east footbridge connects William Heelas Way, which runs through the Montague Park area of ​​the community, with a new roundabout across the tracks at Waterloo Road.

It includes a new bridge to replace the Waterloo Road level crossing, which is permanently closed now that an alternate route is available. Balfour Beatty, the council’s project partner, expects to complete the landscaping within the next two months.

Construction began last summer and the new roundabout and drainage basins were completed over the winter before Balfour Beatty started to link the new road and bridge.

When it opened on Monday, January 24, primary school students came to learn more about the project and its benefits.

They met with representatives from Balfour Beatty, the Mayor of Wokingham Borough, Councilor Keith Baker MBE and Councilor Pauline Jorgensen, Executive Member for Highways and Transport.

Cllr Jorgensen said: “I am delighted that the latest phase of our ongoing efforts to keep traffic flowing in the borough is now open to all road users.

“Once the project is complete, it will reduce congestion by not only creating additional capacity on our network, but improving access to more environmentally friendly modes of transport through a safer crossing.

Cllr Baker said: ‘It was a real pleasure to meet the Headmaster and some of his students, and I’m delighted the school is taking such an active interest in the wider community.’

The scheme is part of the council’s £250million major new roads initiative, which is funding several new roads and other improvements under its local plan.

Meanwhile, the project’s counterpart, the North Wokingham Distributor Road, is nearing completion with only the final stretches west of Old Forest Road, Toutley Road and Bell Foundry Lane to Warren House Road due to the open to traffic this summer.

Cllr Baker added: “These are just some of the benefits of our strategic approach to development, which is expected to deliver a total of £1 billion in community infrastructure.

“By planning new communities from the ground up, we can ensure they are served by new roads, schools, green spaces, recreation centers, sports facilities and more, while ensuring developers pay for it. “