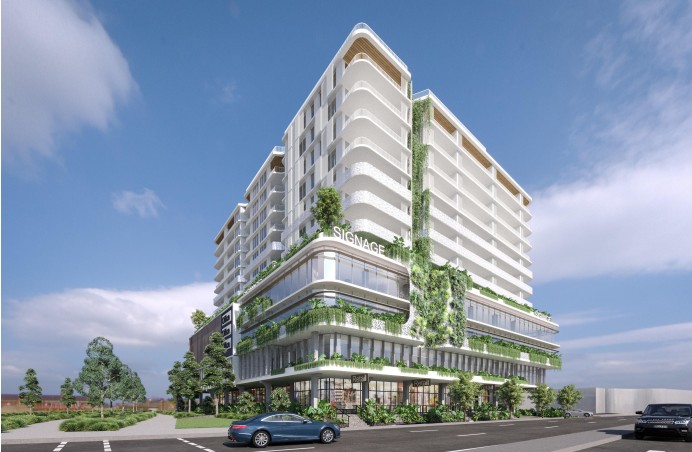 A developer promises to create a “sense of arrival” in the new city center with a proposed “vibrant” multi-storey tower at the entrance to the emerging CBD of Maroochydore.

Capital 22 has applied to build a 13-level, high-density development with 104 units, three levels of office space, restaurants, a swimming pool and a rooftop gym.

Its location at the corner of Aerodrome Road and First Avenue, Maroochydore, is considered the northern entrance to the new Maroochy CBD.

In a planning report filed with Sunshine Coast Council, planners Adams and Sparkes said the tower presented a “strong design response” for the main block.

“The proposal represents a dynamic, high-intensity, mixed-use development with a podium and tower built form consistent with intent and providing a sense of arrival at Maroochydore CBD,” the planning report states.

The development includes a ‘podium’ base with food outlets and the main lobby.

The tower above would house 104 units – a mix of short-term and long-term accommodation.

Due to its location just 320m from the Maroochy River and 1.2km from the beach, the building’s design would reflect the seaside character of the area, the report says, and feature a “light coastal color palette”.

The levels would include:

In their report, Adams and Sparkes said council had already given their support “in principle” to the project which was “generally in line” with planning requirements.

The report indicates that the development application, which seeks a significant change in use, should be approved.

“Council gave strong support to the proposed development in a pre-filing meeting, giving support in principle to the proposal and indicating that the development generally complies with the planning requirements of the local plan code, the uses code multi-unit residential and commercial use and center design code,” the report states.